The awesome folks at 519geeks made this tutorial for us on how to make a pattern. They show it for a chest/torso piece, but the basic principal can be applied to all body parts. Now Worbla is a thermoplastic modeling material from Germany. You may have heard of Wonderflex, well Worbla is quite a bit like it without the grid pattern on it. This makes Worbla perfect for doing things like curves, (ahem certain parts of female armor ahem). It stretches and doesn’t wrinkle as easy as Wonderflex. Worbla is used by heating it with a heat gun…or a hair dryer if you have a bit more time, but a heat gun is almost as much as a hair dryer these days. We picked up one of ours at Canadian tire for just 14 dollars. for this tutorial we used Old Trusty, a heat gun Elicia had in her house that is probably older then her.

Worbla is also awesome in the way that it is easy to both bond to itself and that it can be remolded back into the pile you have left over. It’s also very easy to attach other things to whatever piece you’re trying to add to it. We did use some extra glue for the shoulder straps of the armor but that was just because Elicia is a Nervous Nelly.

Making a Pattern For Your Worbla Armor!
First thing you need to do is gather a few materials.
You are going to need:
Painters tape
(or something like this. Duct tape is acceptable too)
Scissors
Cling wrap
A Pen
A Permanant Marker
(we tried using just a regular pen and I found it didn’t work with keeping the lines straight)
After this you are going to cover whatever part of your model’s body in cling wrap. Make sure to get at least 4 layers or you may have some tape sticking to your models shirt, leg, arm. (side note: also if you are doing a torso pattern, advise your model to wear a shirt they do not like…. in case it gets cut) Next step is to start covering the same area you just wrapped in painters tape or whatever kind of take you decided to use. Remember that your model may be in this for a bit, while you work out the details of their armor so be cautious and make sure they can breathe…..(ours could not :P). When covering the chest area of your model, make sure to do criss crosses with the tape. That will ensure you don’t get any wrinkles with the tape and it fits more snug on your model. One problem we did run into was the fact that the painters tape did not like to stick to the cling wrap so I actually just hit the tape with a bit of heat from a heat gun. It helps the glue heat up a bit and sticks much better. If you do load the model with tape you will find pieces will fall off, but as long as you don’t need that tape and there is still a layer or two underneath just remove it. it will only get in the way. 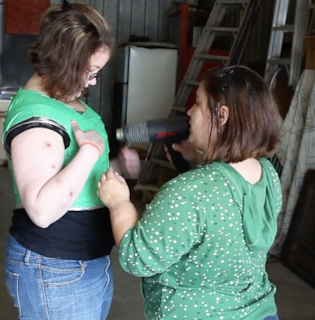 After your making sure no tape is going to fall off you need to take the marker to your model…..no do not draw a mustache on them……(unless you want to…) You need to mark where you want the armor to end. This is the perfect time to give the armor a bit of personal flair. There may be a design you’re going by but this is going to be made for your model’s body alone, so make sure it looks right on them in comparison to the character you are trying to replicate. If you have no character make sure that the arm holes give them enough room to move and stuff like that! Finally The hard part of this process. Getting the pattern off your model without cutting their clothing XD. Remember earlier when I said to make sure they had a shirt they didn’t like…there is a reason for this. Simply slide your hand along where you are going to cut it off them. If you are doing a full black plate it’s still ok to cut it off them at the back You really only need half a piece. This is somewhat akin to cutting out a sewing pattern where you put the back part on the fold. Now you simply need to cut out your pieces (however many you drew) make sure to have them all labled. You may know what they are now but you may not do all this work in one day. You don’t want to come back in a week or so when you get the energy to work on it and can’t remember which parts go where.
As an example here is the finished product with tracings of the pattern pieces over top. Your armor doesn’t have to be intricate to be beautiful…with a
bit of imagination you can turn something simple into something
beautiful too. Making a pattern before you order your Worbla if you are on a budget will make it easier to figure out how much you actually need. To figure out your pattern try placing the pieces next to each other and measure out the length and width.(Side note:Remember to add detailing such as an edge or any raised designs you may want to add to your measurements)
You will need two of each piece. if you are doing the back piece like I did where you only make half of a full pattern remember to measure for 4 of the piece.
And then Trace it onto your Worbla! and that’s it! You have now made a pattern for your armor!
I’ve also done a video on how to do this, it has been sped up so we could show everything
you can watch that here.

Thanks again to Elicia and the awesome folks at 519geeks for sharing this with us!