Cosplay Calamity shared this build with us, detailing the process of making horns for her Goat costume.

My first time with Worbla

There’s some badass armor cosplayers out there right now. Off the top of my head I can think of Kudrel, Yaya Han and specifically Kamui, the grand-vizier of thermo plastic armory.

Seriously, go look up her tutorials. They’re worth it. I promise.

Okay. So. **Spoiler Alert** I am not one of these awesome armorers.

Aside from the Wizard, I’ve only made armor one other time…

And as I mentioned yesterday, it was disasterous.

So, With the Goat I had two different prop/armory things to take care of: The horns, and the pauldron. Both are organic shapes and both would need me to use worbla or some other stiffening (hurhurhur) agent on foam.

Needless to say, I kept putting it off for a couple weeks. But last weekend I took the dive. I’ll walk you through the embarassing process.

Basically google worbla tutorials,[ed: Or check out our tutorial page] but if you can access Youtube, just go to Kamui’s tutorials. Seriously. Go. If you’re really interested in going the armor building route, you can even pick up one of her books. 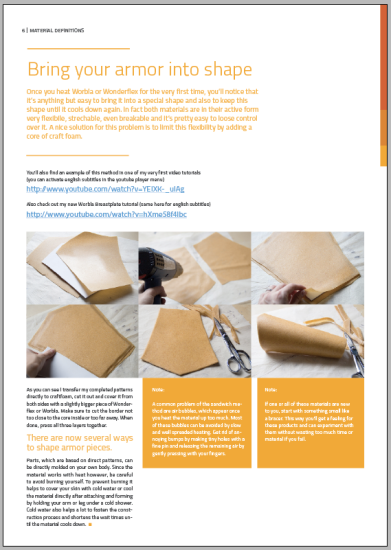 So pretty much, ‘The Book of being Awesome’

On top of how to make armor, I also wanted to look up visual references for what I would be making. Just like with drawing, visual references are super important in order to get a good looking product. Working from memory usually ends up in wonky over or undersized stuff. At least for me. If you are one of those magical ‘did not give yourself a concussion at age 9′ people,well then lah-di-dah. 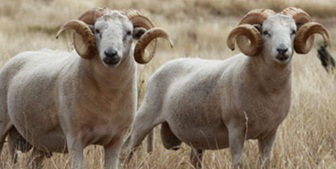 I really liked the horns on the Wiltshire breed.

Sorry forgot to take a picture of this, but basically, I took two lengths of wire, twisting them into a double helix in order to support the long curl of the horns. If you were doing little nubby ones, you could skip this step.

I also did my best to make the wire curls as symmetrical as possible, since if they were different at this stage, it would just get more noticeable the further along we go.

At first I’d thought about using expanding foam, but frankly, I didn’t feel like cleaning up that kind of mess. Tin foil to the rescue! I used the sturdier kind to help hold the shape under worbla. 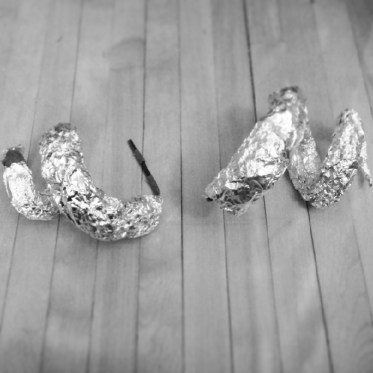 To try to make it as light as possible, I scrunched it upa bit, and then formed it around the wire, wrapping one layer around to keep everything in place. You can see that they’re still pretty jagged though, so I frowned at them for a while before I came up with an idea.

I started using this stuff back when I was still a young athlete who was accident prone. It’s basically a thin foam tape that you use between medical/athletic tape and skin. Or as headbands. (Best headbands ever.)

I realised I still had some of the stuff from my most recent soccer days, and scrounged it up to wrap around the tinfoil. It turned out to be the best option. Weightless, it also gives me a surface to glue the details onto, and for the worbla to grip, while smoothing out the bumps of tinfoil. 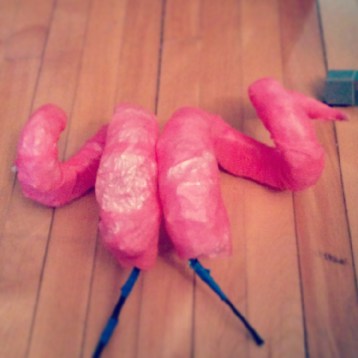 And it comes in awesome colours.

I’ve got the general shape of the horns done now. Buuuuuut… They’re pretty boring. Well, the hot pink helps, but that’s going to get covered, and would clash with my dress anyways. So. Ram/goat horns have ridges to them, and rather than waste precious (and expensive!) worbla on them, I had picked up some rope from the dollar store. along with some duct tape, and giant twist ties.

Pretty sure I’m now on some possible kidnapper watchlist but this is how I suffer for my art.

Back to the rope: 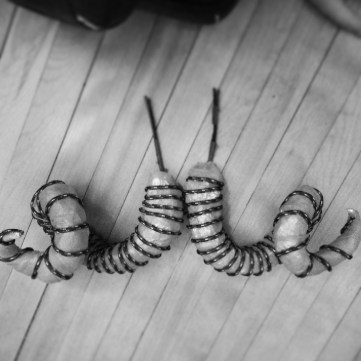 I just hot glued it into place with dots every third coil, since the worbla will hold it all in place later. Remember to singe the ends if you’re using a poly rope so that it doesn’t fray as you’re working. If you’re using a cotton rope (like I did on my armor), use hot glue to stick the ends together.

It’s so curly and flat and scary. And Expensive. What if I mess it up? What if I waste 40$ worth of worbla because I’m a dumb?

Take a shot of fortifying drink of choice, and grab your craft scissors. Then use your feet to hold the worbla flat enough to cut, like so:

I hear fancy people use weights, but if you’ve read anything else on this blog,

you should know better than to expect that.

Because the horns are so organic, and 3D and ohgodwhy curvy, there wasn’t much point to tracing out the shape on the worbla. Instead, I cut out strips and put them on as best I could. I would end up smoothing them out later.

Take your heat source (heat gun, iron, hair dryer, element) and heat up your strip of worbla until it gets a little shiny and floppy, then drape it onto your object, poking it into shape with quick touches. If you hold it down, that shit’ll get hot. I ended up using a marble to roll the worbla into the space between ropes. 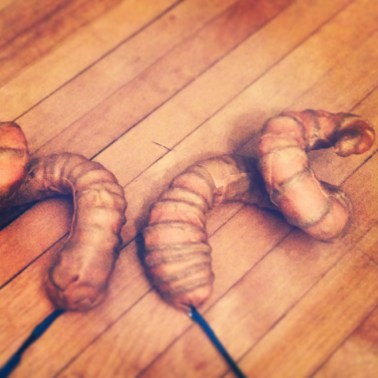 Sorry for the grainy quality, but I wanted the edges to really show up.

Hooray! We used a hot tool without sufering severe burns. Some singes, maybe, but those are just marks of a crafts person.

Okay. We now have sturdy worbla horns but with ugly-ass edges of worbla everywhere, because we did complicated things for the first time and couldnt just lay things flat.

So the next step is to fix those lines. You can either use the element/heat source you had earlier and carefully smoosh in the lines, or use a hot tool (Hot knife/wood burning tool) to smooth out the ridges we don’t want.

Always cut/smooth AWAY from yourself.

Carefully, and I do mean carefully, smooth out the ridges where worbla layers on top of itself. The knife can catch and skip, and you really don’t want to have it stab into your hand or a face. Because as hot as the worbla was the last step, this is much hotter, and will hurt like a mofo.

I know my father has protective gloves from when he carved, but I have yet to find a pair in my dinky-small hands size. But if anyone knows of where they might be, drop me a line in the comments. 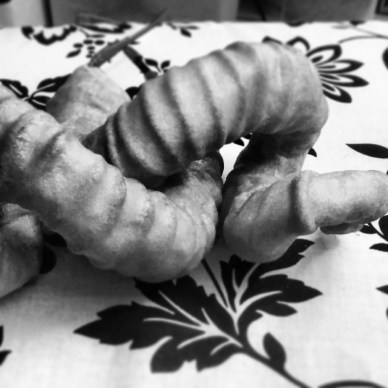 This is the awkward part, because of the corkscrew shape, it’s hard to get at the inside parts, especially with the hot knife. But, carefully, it’s possible.

Heat up the rough patches with your hair dryer/heat gun and then smoosh them down with your marble/finger so that they match the rest of the texture.

Then, hopefully, you’re burn-free and ready to prime!

After a weekend of carefully not burning myself on glue guns, heat guns, and hot knives, I made breakfast, and burnt my fingers on my poptart.