We partnered with Mage.Cosplay for her Jessie build, and she shared the process of creating her armor and accessories with us. If you’re looking to make Jessie for your next costume, check out how Mage went about the process below! 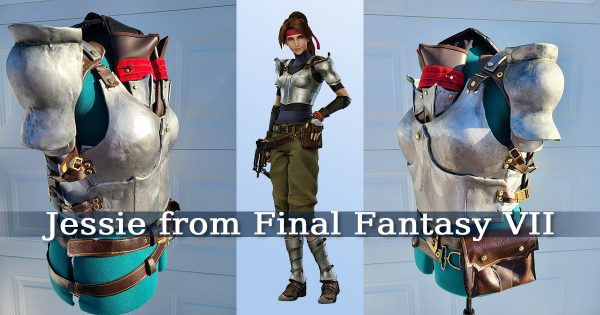 Disclaimer: While the general principles of using thermoplastics, such as Worbla, will be very consistent, there are many methods to use the material to construct costume elements. My methods may not be the best for you, so please keep in that in mind! In summary: There are many tutorials out there, but I’m hoping that sharing mine will help you figure out what’s best for you!

Patterning: The base pattern you’ll see in this tutorial came from Jenny Desu; I bought it from her Etsy shop. This is also my first time using someone else’s armour pattern, so we’re learning together.

Materials:
• CosplaySupplies has generously partnered with me for the Worbla’s Black Art.
• The foam I’m using is two types – one is a high density foam I purchased from CosplaySupplies and the other are yoga mats I picked up from the dollar store.
• Metal bits included a handful of purchased buckles and connectors, split pins in a couple sizes from the stationary store, and jewellery wire that I used as a frame for my DIY fasteners and connectors.
• Contact cement (as little as possible) and hot glue.
• There’s also some hook and loop tape and elastic used.
• Paints are dollar store acrylics, a bit of gold spraypaint, and some PlaidFX Armour.

You can see here the glove pieces and also part of the boot pieces as well. The glove pieces will just be getting one piece of Worbla to add strength and give them a nice finish. I’ve left a bit of a seam around them, per usual.
My tools for smoothing the corners are pretty low key—the handle of a paint brush and an old room key. I manipulate the material with my gloved hands while it’s hot and then come in with the card and brush once it’s just warm, so the heat doesn’t warp either.

Since the front of the boot might get banged around a bit, I made a Worbla’s Black Art sandwich. I’ve also put the seam a bit closer to one side by using the paintbrush to push the bulk toward the back. Afterward, the excess was trimmed off and added to my scrap pile. Those scraps will make an appearance in the fastenings and closures section.

I’ve used split pins to fake my brads on all the armor pieces. By heating up the Worbla, I can make it pliable enough for a sharp wooden skewer to pierce both it and the foam. This makes a nice, clean hole that’s also sealed as the Worbla gets taken along for the ride by the skewer.  You can see that I’ve left the back of the plates open, which makes them light and still very springy. 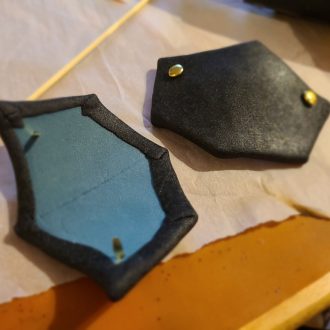 JennyDesu’s pattern has been transferred to thin camp mat foam and an approximately-the-right-size piece of Worbla’s Black Art is ready to go. My surface is a silicone baking mat and some parchment paper, alongside a heat gun and a large Christmas ornament to help me round off the shapes.

All the foam pieces have been hot glued at the seams. The hotglue will re-activate when I apply heat via the thermoplastic, but it is essentially just there to keep the foam in place until the thermoplastic gets there. This cheap foam also deforms very easily, but the strength will come from the Worbla. 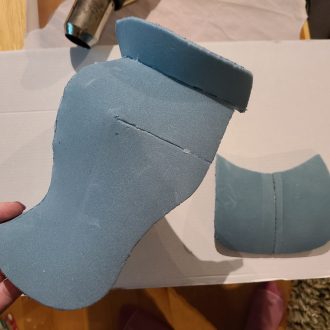 This is what it looks like after one layer of Worbla’s Black Art. I was able to easily reposition the material as I went, although you can see I could have given it one more go to make sure I got the corner flawless. I stopped fiddling with it because I don’t mind the imperfections here; the character’s likely to be using armor that’s seen many encounters and been dinged, damaged, and repaired several times. They’re also more rounded than they appear in most reference art, but that’s partly the pattern and partly personal preference.

A test shot of how the two pieces of the pauldrons will fit together. With this, the hard parts for the base are all set. You can see the split pins in the bottom piece; they’re the same as in the glove pieces. 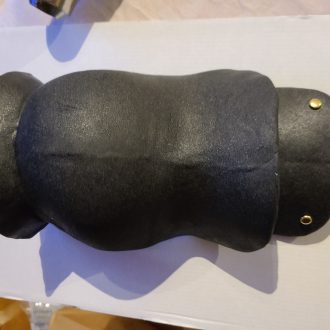 The cuirass consists of many parts in JennyDesu’s pattern, so the first step was to transfer these all to foam. The difference is that I wanted a more firm structure for the central plates, so instead of camp mat, I used a higher density foam that I purchased from CosplaySupplies. That’s the grey foam you see in the photos. This was also necessary to get the peaked look you see on the backplate and the stomach plate – those pieces were cut at a 45 degree angle and hot glued.

Since I knew I wanted to already have a good rounded shape present in the foam before I applied the Worbla’s Black Art, I used contact cement on the darts for the upper breastplate. It required some cold outside time, but the fumes are no joke and it’s important to not take risks with that! Unlike hot glue, the contact cement doesn’t re-activate with the application of heat and is more easily sanded.

For the side plates, I did just use hot glue – mostly because I didn’t want to deal with the contact cement fumes and these pieces would not need to take on any complex curves before they were covered in thermoplastic.

I continued working the top and bottom halves of the breastplate separately once they were covered with Worbla. This made it much easier to work on getting the breasts into the shape I wanted them, which followed the same method as when I shaped the upper shoulder armor.

Having thicker, stronger foam underneath made it much easier to really work on the Worbla in terms of smoothing it out around curves and adding in further curves and details where I wanted, which will be easier to see once we get to the paint.

For the lower breastplate, Jessie has these kind of faint abdominal muscle looking lines, so I tried to mimic that as I was shaping. I didn’t have to worry about the fact that I’d used hot glue on that centre-front ridge as the glue was nicely sandwiched between the thick foam and the Worbla. 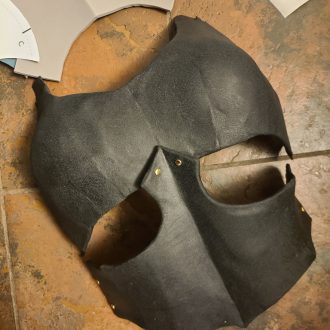 Now the centre back plate and its side plates have been covered in a single layer of Worbla’s Black Art. Split pins were placed, although I messed up and put some pilot holes in the wrong places after misinterpreting pattern markings. You can kind of see the shoulder blade markings I worked into the back plate and the similar markings on the lower breastplate. At this point, I’d just about reached the point where I had to join the upper and lower breastplates to do any further fitting. 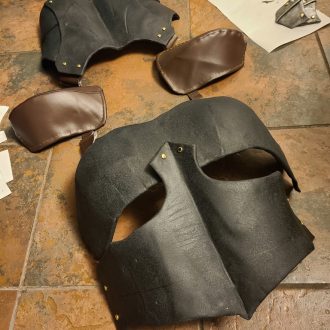 So this step looks a little violent, but one of the ways I made sure that the upper and lower breastplates would line up properly was to use my skewer to put one continuous path for split pins between the two pieces. Although the adhesion of Worbla with itself is fantastic, it never hurts to have a mechanical connection to back-up the chemical one. Of course, this necessitated buying some split pins with longer shanks! 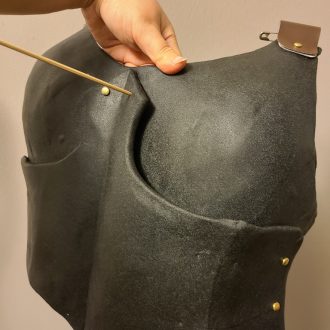 JennyDesu’s pattern was transferred to thin camp mat foam. For one greave, I transferred each pattern piece to Worbla’s Black Art with about a half inch of allowance all around. Once adhered, I rolled over the seam allowance and then started to curve the piece. This was repeated for the other two main plates on this greave.
The second greave followed the same initial pattern-to-foam transfer, but I next glued each of the plates to each other and continued from there. Since the foam pieces then had a shape, it was more a matter of best-guessing the size of Worbla piece needed and leaving a much bigger margin for error. I had thought this would save me time, but heating and fitting the entire greave at once took much more time than doing the heating and fitting of each piece first, then adhering each Worbla-covered plate to each other. I used an old hotel key card, pressed into warmed Worbla, to add in the seam lines, where needed. The shoulder straps show this sort of detail more explicitly.

I started with no pattern, just rectangles of foam in the correct length. I wanted to straps to be able to flex easily and they won’t bear any actual weight, so just one layer of Worbla’s Black Art, so I wrapped the Worbla around the foam and set the initial curve, then I used my old hotel room key to press the Worbla’s Black Art in around the edges of the strap. This allowed me to keep things very thin as an alternative to adding a bezel via foam and/or additional thermoplastic. You can see I put the pilot hole for the split pin in as well.

I did a little work on these with a rotary tool, which you can see showing up a bit lighter here. Worbla is capable of highlighting even small differences in foam surfaces, so you could see the seam where the two halves of the pattern met up. I chose to leave the surface as it was, so the finished pieces will reflect the native texture of the material, rather than looking for a mirror finish. You can similar results on the piece of leg armor. I used a rotary sander to take off some of the spots where I hadn’t lined up the seams very well. I was good with a dented-and-hand-hammered type of finish, but it needed to be somewhat clean,

Base Layer:
I actually rather like the base texture of Worbla’s Black Art, so I didn’t prime the surface or try to smooth it further. I had some VERY old silver acrylic on hand, so I mixed that with some Flexbond and applied a thin layer over the pauldron pieces. I did some paint tests to see what depth of colour/shine I wanted to go with and you can see some of the results in the following comparison photos.
On the right is acrylic silver paint with some Flexbond. On the left, the same base, but with a layer of PlaidFX’s Armour series paint in Samurai on top.

Here’s what the painting steps looked like for the shoulder straps, after using some dark grey acrylic to weather it and try to bring out the “edge” I put on the armor as well. 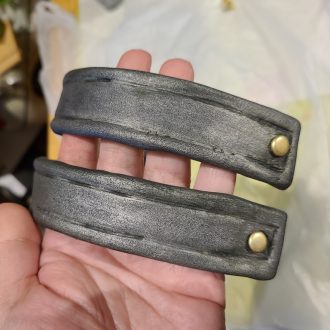 For areas like the backplate, I repeated the weathering process several times to try to get more difference and depth between the high and low areas. I also went in and applied some black sharpie before adding a bit of the brighter silver as highlights. 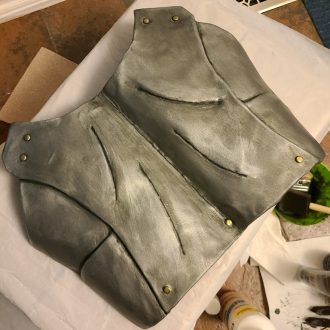 From left to right is the evolution of small buckles made from Worbla’s Black Art. These used up some of the scraps that were left after cutting out the bigger pieces for the armor parts.

I also needed to make some fasteners and buckles that were non-standard sizes and shapes. For this, I also used up some scrap Worbla’s Black Art. For the large belt buckle, I made a paper template, then used two layers fused to each other. For the pin, I used a short length of jewelry wire as a core. 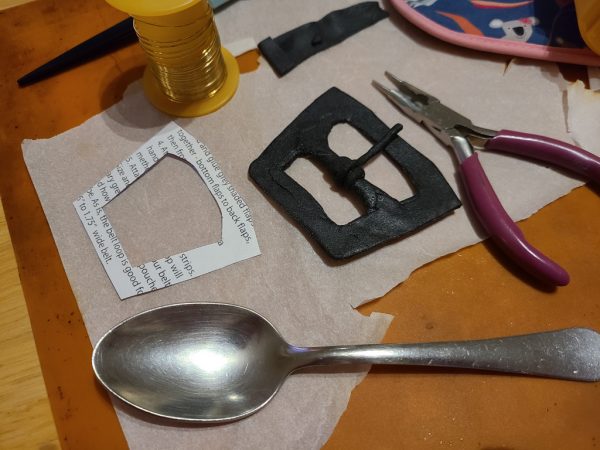