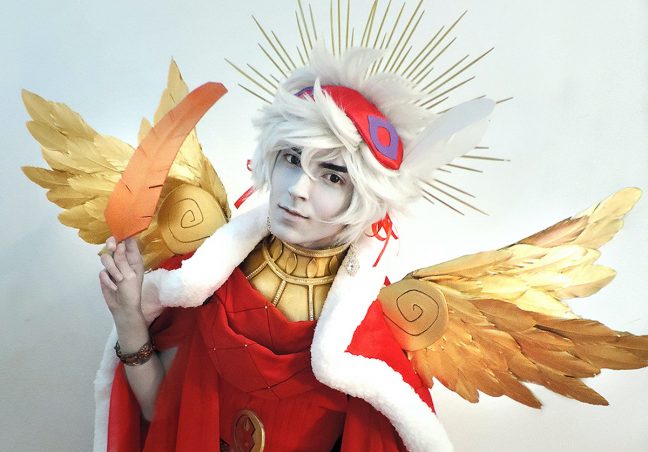 We partnered with squeakadeekn on their Hypnos build and they created 2 tutorials for us. The first we’re sharing is this fantastic breakdown on how to make neck armor, using Worbla as a base under EVA foam for a sturdy but lightweight, durable piece of armor! 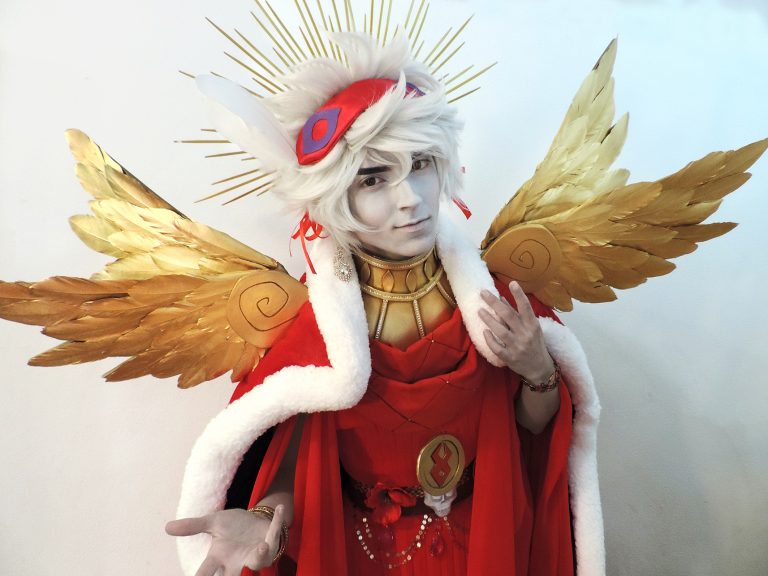 A challenge of working with EVA foam is it can be too soft and too flexible; this makes it difficult to use for foundation pieces that have to support big costume parts and often leads to excessive wrinkling. A fantastic solution to this is using Worbla as an understructure beneath your foam. The Worbla increases its overall strength and limits how much it’s allowed to flex. This allows you to still use foam priming and assembly methods, but have more versatility in terms of using it to support heavy items and reduce the speed of foam aging.

When making Hypnos’s neck armor I planned it to also be the attachment mechanism for his big blanket cape, so it needs to support a lot of weight. Plain foam would wrinkle and tear, but the Worbla understructure makes it strong enough to do this, and even helps enforce its shape too!

Patterning:
To get the pattern for Hypnos’s neck armor, I started by covering a dress form in the saran wrap and duct tape. On the duct tape cover, I used a pen to draw on the shape of the neck armor including seam lines and potential spots for velcro/magnets to attach the blanket cape. In general I try to add seam lines in the areas where there’s a nonlinear curve in the silhouette (in this case, the shoulders, neck line, and front of the armor). It’s worth including that the flat neck section shown here was just a placeholder, since I will be using a much more shaped and articulated neck pattern I had modified from Evil Ted Smith.

After this I cut out the duct tape pattern and tried it on for a quick sanity check to make sure that it fits and is shaped generally how I want it.

Once the pattern is made, I then transferred it onto 4 mm EVA foam. Here you can also see the more articulated neck pattern I had mentioned previously. The neck and shoulder sections are separate to allow for a more pronounced transition from neck to shoulder.

Assembly:
With the pieces cut out, I then assembled the base of the armor using contact cement. The neck and shoulders are still separate, but after a test fit I marked where the transition line is for reference (seen as the silver pen line in the first image below).

At this point I secured the neck and the shoulder pieces together using hot glue and trimmed the excess foam overlap underneath.
Now that it was one unified piece, I sketched out potential placements for the detailing using a silver pen. Once I knew the positions, I cut out small strips of 2 mm eva foam and began laying them down on the armor using contact cement.

Now for creating the Worbla’s Black Art understructure! Since this armor was also going to be used as a support for Hypnos’s very heavy blanket cape and wings, plain unsupported foam would have torn, wrinkled, and put a lot of stress on the front of my neck. This was a good solution to all of those problems, resulting in an armor piece that let me use the priming methods I like for foam and had the durability of Worbla!

To make the understructure, I took the same duct tape pattern pieces I had used for the foam armor and traced them onto Worbla’s Black Art, making sure to cut around 1/4th of an inch smaller along the outer edges so it won’t poke out from the corners. I also added around ½ of an inch of extra length on the sides to allow all of the pieces to overlap. You may notice that I only added Worbla to the shoulder section, this is because the neck section won’t be used to support the blanket or wings, so it was fine to leave it as plain foam. 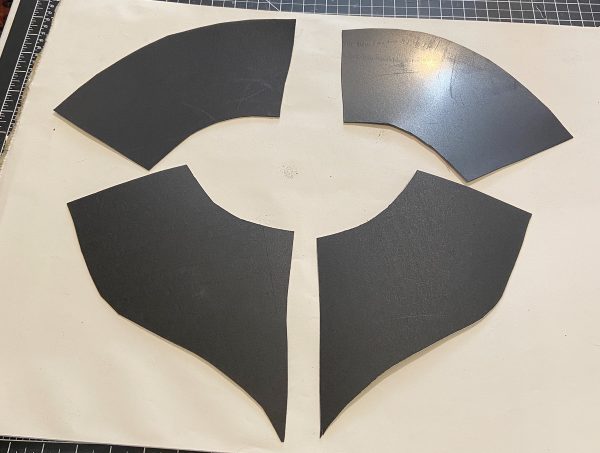 The Worbla’s Black Art was then heated and pressed onto the underside of the foam armor on the adhesive side, section by section with occasional dabs of hot glue to secure the Worbla extra tight to the foam. I also overlapped the Worbla pieces to solidify the structure. The back edges overlap/wrap slightly around the foam for added security.

I had concerns about the comfort of the edges and seams against my skin, but for the test fits I’d worn it for, I didn’t experience any poking or pain. However If you are worried about this, you can always add in an additional layer of felt, fleece, or other soft fabric as a comfort lining.

Priming and Painting:
With the structure done, it was time for priming and painting! I followed my go-to procedure for priming EVA foam with is as follows: 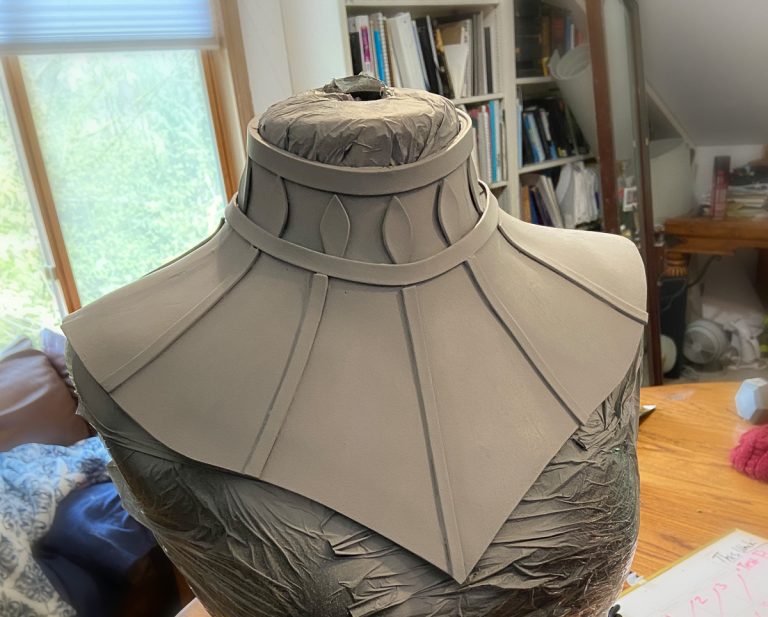 The gold I used for the color was 2 coats of Rust-oleum Metallic gold; I also included additional details such as contouring with a metallic gold/darker brown acrylic paint mix and used rhinestones to match the fancy energy the rest of the costume has.

Now that the base was made and the painting was done, I added in the attachments and closures. I glued the ropes directly onto the armor since the logistics of making it separate/attached to the cape ended up getting pretty cumbersome. It’s secured tightly with lots of hot glue on the edges and the area directly underneath the velcro patch to avoid it lifting up. There’s two squares of velcro and two magnets at the corners of the blanket to keep it in place, as well as a patch of velcro all along the back. The wings use two squares of velcro each on the shoulders.

To close the armor itself, there’s an additional small velcro strip along the back edge to keep it nice and tight, but because the shape is so molded it’s able to stay on and look fitted even if the velcro in the back doesn’t hook.

And that’s mostly that, folks! In summary, Hypnos’s neck armor was created first by using a duct tape neck armor pattern, then a main base of 4 mm EVA foam which was reinforced with Worbla’s Black Art underneath, primed and painted with fun details and secured with velcro and magnets.

And here’s the final costume! The neck armor did its job well and supported everything like a champ without the usual damage that occurs with EVA foam. It was also comfortable (albeit a little tricky to get on, haha)
I hope this was informative and useful! :^)